Saving the town in the summer of 68


Hello.
Recently I have just had a new re-interest in the Vietnam conflict.
The cold war is an amazing subject. Only in the last 2 years have I truly begun to understand the scope and significance it has had on history, its fascinating.

I used to be a staunch WW2 player. But now I'm looking forward to playing a modern war.
The 60s was an amazing time in human history. Definitely my favourite decade ever. So let's celebrate it.
It's never been a better time to live. Enough of the old WW2. It's the 60s. And the times they are a-changing'.... Unlike Close Combat... Close Combat stays the same.
Play music. Get stoned. Question your leaders and get ready to kill some Charlie! 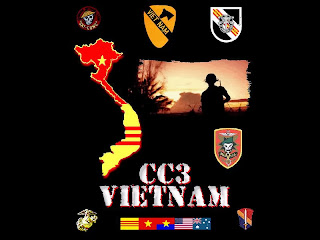 Today i will be playing Close Combat 3 the Russian front. Released in 1998. I have installed the Vietnam mod.

We have been getting disturbing reports that a local village of 'HàHà My Nghèo Làng' is storing rice in their town. Theirs enough rice there to feed the town for a year and then some!

Our mission? Move-in and take it out.  Capture the rice storage and eliminate the Vietnamese.

Nearly all the civilian residents of 'HàHà My Nghèo Làng" village would have left for the market by the time we get there. And any who remained would be Vietcong or Vietcong sympathizers. 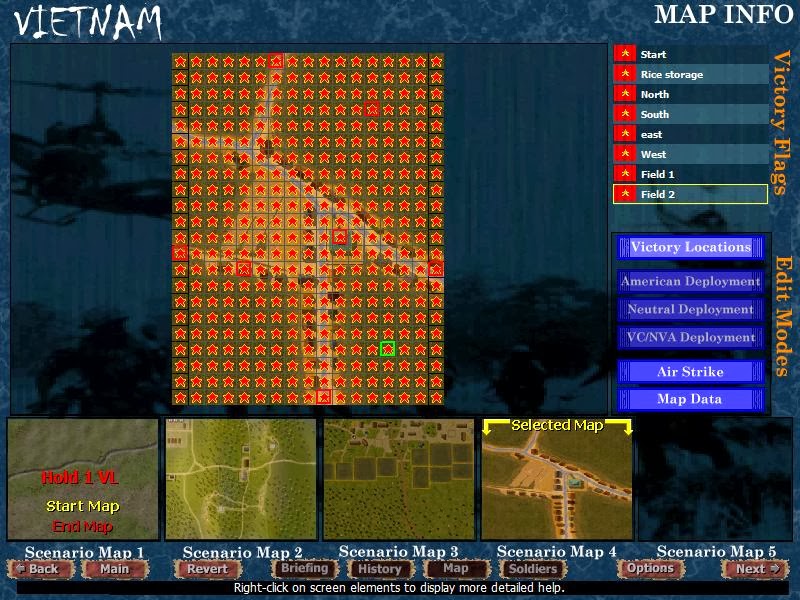 The Village.
'HàHà My Nghèo Làng'. We will call it My Lang for short.

The mission is to-

*Protect the landing zone (LZ) after landing in the bush.

*Eliminate all VC on the way to the village.

*Get to the My Lang village preferably within 4-5 days/Turns. Anything more than that MAY be very detrimental. 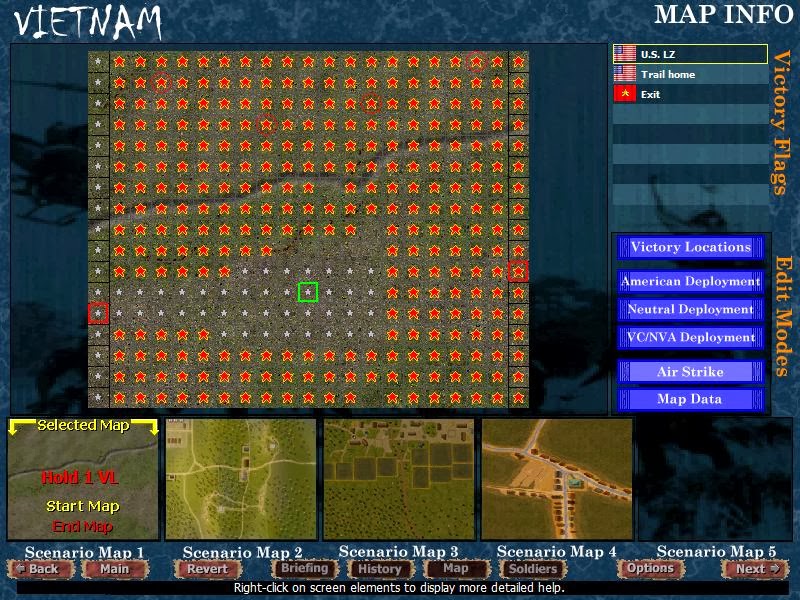 This is the landing zone. Our helicopters will land our troops in the clearing. We expect heavy Vietcong presence in the bushland. After that, it should be smooth hiking from there.
Why?
I'll show you... 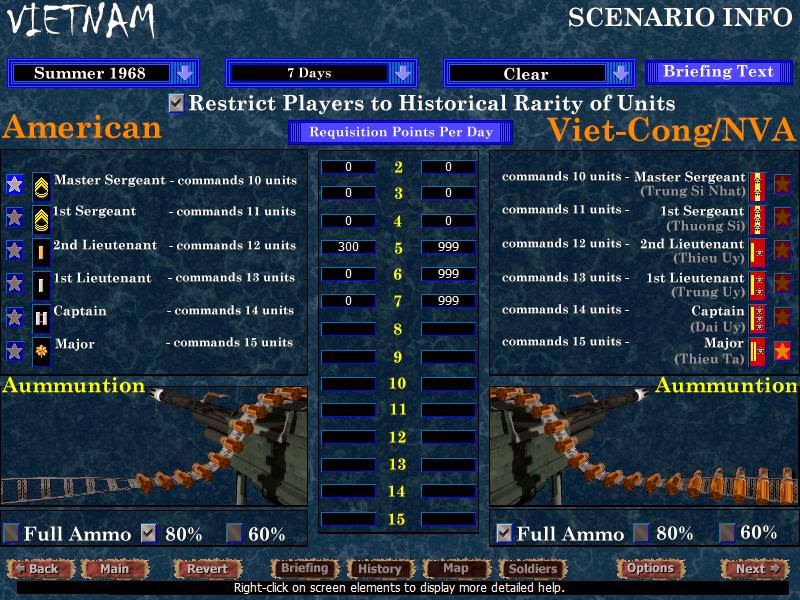 On day 1 there will be a full 15 unit army of Communist enemy's. We are outnumbered. Our side will only have 10 units. However, we have superior firepower. And my goal is to blast the VC to smithereens without taking any losses my self.

Now, if I win every single battle on the first turn then it will take me a minimum of  4 days to reach the 'Hà My Làng settlement'.

If this is achieved then it works in our favour. Because our enemies will be getting no reinforcements.
(But neither will we.)

So if all enemies are killed on the 1st day then the rest of 2 maps should have no resistance. Including the village.

Any enemy soldiers I fight after day 1 and before day 5 will only be survivors from the initial L.Z battle.

So the more we kill the better! 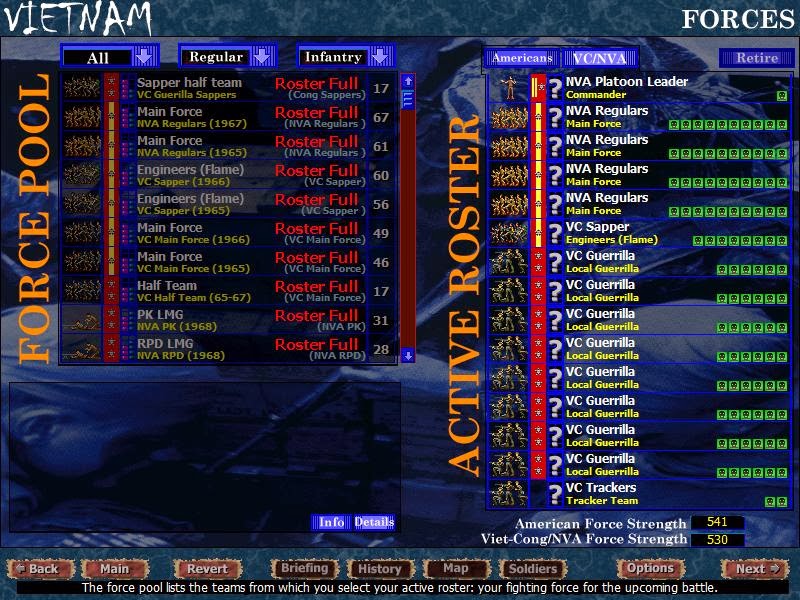 This is The Vietcong guerrilla army. They also have  4 units of the regular North Vietnam Army. 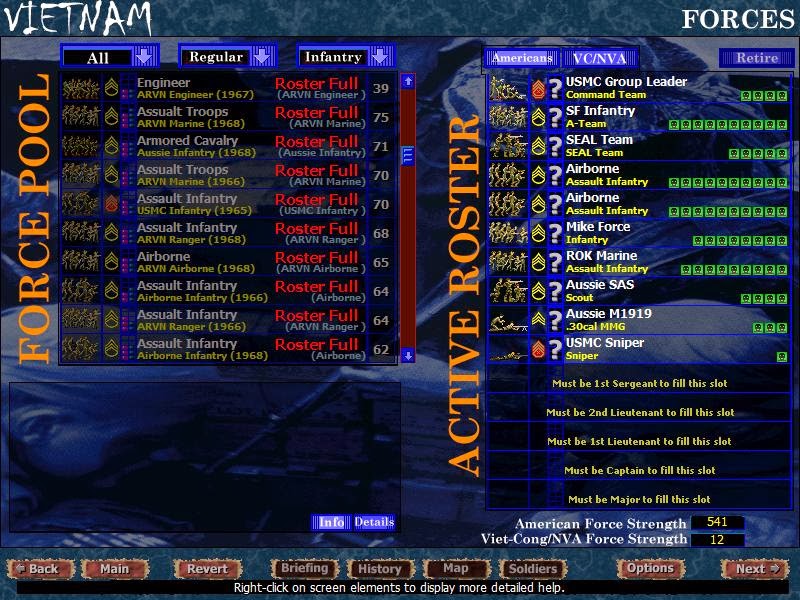 These are the men im taking. Ill talk a bit about them.

Here is the Command team. The Commander is Antony.  Antony is the leader of the group. He makes the decisions on the battlefield once all the fighting starts. All troops will be given a boost when the are near him..
I'm with Shaft and Jordan who both have the  M16 rifles. And my favourite Burris! He gets to call in air support!

Pulling out all the stops here. Seal team!

The game has the indigenous mike force unit. MIKE Force was called a force multiplier, operating what is today called a foreign Internal Defense mission.
Here is a photo.

.Couldn't find many photos on the internet. Then i found this on Facebook.  https://www.facebook.com/MikeForceAssociation/photos_stream
Its a Facebook page dedicated to them. The page has a lot of photos. 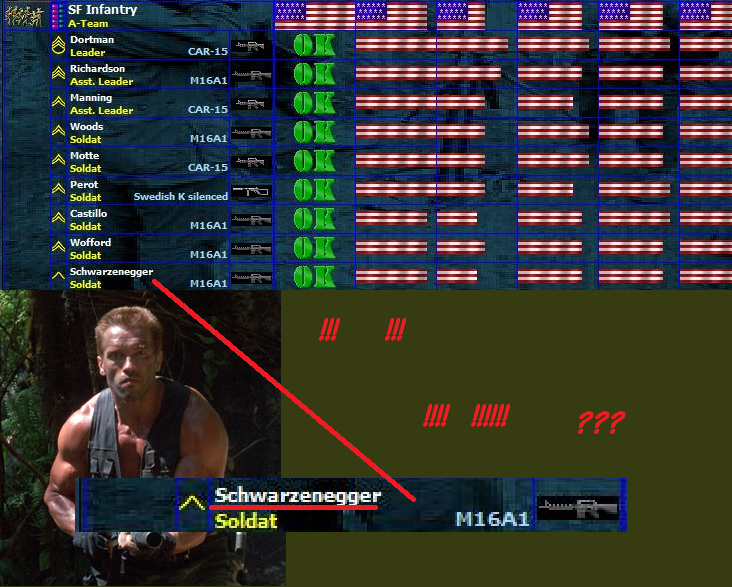 
These guys are tough badasses. They hate communist. And given there country's history, for good reason! Time to make them pay for Kim Il-sung !
They love saving Vietnamese towns. I wasn't going to bring them, but after they found out about our mission, they insisted on coming along!
Liberating towns is their favourite pastime. And in Vietnam, you need good pastimes.


"So when you're in the Neighborhood, you better DUCK! Coz the r.o.K are grazy as FUCK! They in the capital, killin VC. BOY YOU DONT FUCK WITH ME!" -There rap song


When I'm called off I got a sawed off
Squeeze the trigger and bodies are hauled off
You too boy if ya fuck with me
The police are gonna hafta come and get me
Off yo ass that's how I'm goin out
For the punk motherfuckers that's showin out
Niggaz start to mumble, they wanna rumble
Mix em and cook em in a pot like gumbo
Goin off on a motherfucker like that
with a gat that's pointed at yo ass
So give it up smooth
Ain't no tellin when I'm down for a jack move
Here's a murder rap to keep yo dancin
with a crime record like Charles Manson
AK-47 is the tool
Don't make me act the motherfuckin fool
Me you can go toe to toe, no maybe
I'm knockin niggaz out tha box, daily
yo weekly, monthly and yearly
until them dumb motherfuckers see clearly


But they Are Okay. Get it. R.O.K Booomdiiiiisssh :)

Here we have the Australians. Notoriously lazy, undisciplined, alcoholic.
I'll make sure I allocate them all the hard jobs.

At least we have the Australian SAS. And the SAS kick ass. Mark Nielson is the leader. (Q.M)
Along with Seymour skinner, fetteman, and ... posey.
They are going to do all the hard stuff. Let's see who survives.


And of course, we have the MG team. We have Mayhew and swift. And the gunner Shane Davidson.

Good luck to them.

I filled in the gaps with these Airborne troops. Makes sense considering they are arriving by helicopter.

Their leaders are called Little and Van Dyke.

And last but not least we have the U.S Marine Core Sniper.

Miltilda is a bad ass with chip on his shoulder . Lets see how many kills he makes.